Breaking free from a narcissistic relationship is hard. You become used to putting up with him loving himself and no one else. You get used to always being second choice and not getting nearly enough attention as you deserve. You get used to that kind of behavior and, sadly, you don’t do anything about it. Not until things go too far and beyond repair.

You have some happy moments when he ‘forgets’ how much he loves himself but most of the remaining time, you feel like crap because he doesn’t give a damn about you. In the moments when he gives you crumbs of attention, you realize that your relationship should have been like this all the time and, sadly, yours is not.

The only thing that the two of you have in common is that you both love the same person.

Narcissistic relationships are like drugs. You get addicted. You know that you have security and that you are not alone. Sometimes women trapped in these relationships would rather settle for these kinds of men than none. So, you stick around out of fear of being alone. You would rather endure pain and suffering than solitude.

Narcissistic relationships are challenging. You are 100 percent positive that you are the creator of your own happiness. You are but you can’t and you shouldn’t control every little aspect of life. It’s not your job to make this crappy relationship work. You are not the only one in it—it takes two to tango. So don’t pressure yourself because you can’t fix him and you never will. You may think he’s going to change because of you, but later on, you will realize that it was all a class act—just another manipulation tool.

Your only role in a narcissistic relationship is to feed your guy’s ego because it’s all about him and you come second to that—and you always will.

After that, you lose your self-respect and your self-worth and you take emotional baggage into your next relationship. You take your fears and your insecurities—all because of that narcissistic d-bag.

When you finally find the courage to break the chains of your narcissistic relationship, you stumble upon another obstacle. You meet a good guy who treats you the way you deserve but you feel way out of your comfort zone because up to this point nothing was about you—everything was about him.

Here are some of the things that can happen to you when you meet a good guy after a narcissistic relationship:

1. He knows there is more to you than meets the eye

This is a completely new and strange feeling. He is confident in you. Your last relationship made you doubt yourself and all the choices you made. But now you’ve met a person who knows you can do anything that you set your mind to. This new feeling you’re experiencing makes you feel awkward because you are not used to being treated the way you deserve.

2. He wants you to trust him

He knows that you’ve been in a relationship where your voice hasn’t been heard. He knows that you are living with a fear of history repeating itself. That’s why he is patient with you. That’s why he gives you time to surrender to him and trust in him.
Your last relationship was built on unstable, trustless ground. You were the one to blame for all the problems you had. It’s no surprise that you lost the ability to trust people—your ex made you believe that.
This new guy knows that and he is working his way up to prove himself trustworthy. And what’s more important, he’s letting you learn to trust yourself again.

3. He treats you the way you deserve 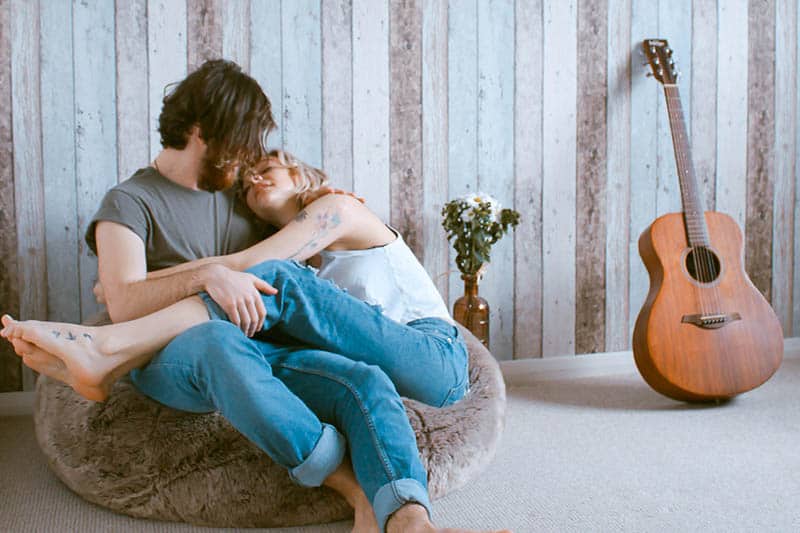 He is kind to you all the time. He is doing the simplest things that you never experienced before. You’ve been trapped in a selfish relationship and you didn’t even think about what it would be like if your guy did something for you for a change. But now that you have it, you don’t know how to react.

4. He pays attention to what you’ve got to say

In your last relationship it was all about him. The only word you’d been hearing all that time was ‘I’; I did that, I was there…
But not this time. You have the right to speak when you want and you most definitely have the right to say what you want without any fear of hearing that you are stupid or of being judged. Your new boyfriend will listen to you. Your words will have meaning to him. He will be interested in what you’ve got to say. He wants to hear all about you and your past. He wants to know what you like and don’t like. He wants you to share your life with him.

You are used to apologizing all the time for pretty much anything just to avoid arguments—although sometimes these things got out of control and you almost fought to the death until someone walked away. And when you or he cooled off, life continued. That emotional roller coaster becomes normal—you enter an endless routine from which you can’t get out of.
But it’s different with this guy. Of course you will fight because everyone fights. But the one thing that is going to leave you speechless is that he’s going to say those three little words: “I was wrong.”

6. He will give you the world

You were always going the extra mile to suit the narcissist—but you got nothing in return.
But now, there is someone who will surprise you with flowers for no reason and who will take you on dates and treat you like a queen. And all that with no hidden motives. He doesn’t need anything from you. He just loves you. It’s as simple as that.

7. He is not manipulative

Narcissists are men who like to be in control. But no one can control every part of their life and that’s when these guys lose it and take it out on others. That leaves you walking on eggshells around him, being careful not to say something ‘wrong’.
When you enter a normal, healthy relationship, you learn that such behavior is non-existent. You learn that relationships are all about compromise and that there are two voices to be heard—not one.

8. He teaches you what love really is

That leaves you wondering how you could have tolerated anything less than the treatment you have now.

But you don’t feel ashamed and you don’t pity yourself. You are proud of yourself because it takes a strong woman to break free from a narcissistic relationship.