Your Gut & Your Brain – The Mysterious Connection

It is a known fact that your brain is constantly communicating with the different organs of your body. The brain is a part of our Central Nervous System and extends its functions through the body through the spinal cord. But did you know that there also exists a brain in your gut, making up the Enteric Nervous System?

Gut-Brain Neuroscientist Diego Bohórquez researched the connection between the brain and the ENS which is a two-layered lining in the gut having over a billion nerve cells. These cells span the length of the gut system, from the oesophagus to the intestines to the rectum. The Enteric Nervous System is labelled as the second brain in our bodies because it is so much in contact with our head and the skull. This close connection is what leads us to have cravings and to feel queasy when feeling nervous.

It was assumed until recent times that these two systems communicated with each other through hormonal secretions made by enteroendocrine cells present through the length of the gut lining. It was determined that these cells would release the hormone molecules when the presence of food of bacteria was sensed in the gut, in turn modulating the response of the nervous system.

However, it has now been discovered that the process is not as drawn-out as it was assumed. Bohórquez, who is a TED Fellow, discovered that some of the enteroendocrine cells also interact with the enteric nervous system directly through physical contact, by having their synapses of those nerves touch each other. This discovery brings to us a new way of looking at the Enteric Nervous System and how it signals the brain, and how this could open new doorways to treating many types of medical conditions, such as anorexia, irritable bowel syndrome, obesity and PTSD.

But what was it that made Bohórquez look deeper into this relationship between the brain and the gut? The answer is chickens.

Bohórquez first job was at a nutrition laboratory that worked on chickens at the North Carolina University when he first moved to the US from his home country of Ecuador, as a visiting research scholar. As he explained, the focus at the laboratory was to help the hatchling chicks reach their highest growth potential in as short a time as possible, as was the requirement in poultry production. Bohórquez’s PhD advisor suggested to him that they begin feeding the chicks before they even hatched, through their eggs, as a form of in-ovo feeding.

This meant that the enzymes required for their growth were injected directly into the amniotic fluid surrounding the embryo a few days before it hatched. The hatchlings which were not injected with the enzymes would rest and sleep for a few hours post their hatching. But the fed hatchlings would begin to eat straight away. As Bohórquez said, these hatchlings also appeared to be more active and would spend their time observing their surroundings and even pecking at each other. This fascinated him enough to want to understand how the nutrients they ingested affected their behaviour.

Bohórquez said that his friend had had an on-going struggle with obesity, and had resorted to the gastric bypass surgery when other options had failed to work. The surgery was the answer, and she lost pounds of weight and cured her diabetes. She also found that her taste buds reacted differently now. Foods that had disgusted her before, such as runny eggs, she would now crave.

This kind of food preference changes have been noted and documented in many patients who have had bariatric surgery, and Bohórquez says that scientists are unaware as to the reason why. It is a whole new area of research and only proves that changing anything related to the gut physically changes a person’s perception of taste and food in the brain.

Scientists have known for years that the enteroendocrine cells in the guts sense the presence of food and nutrients, but it wasn’t clear to them as to how it happened.

What they did know is that stimulation of these cells causes them to release hormones which further either interact with other nerves in the vicinity or enter the bloodstream to prompt us on our eating habits. But what Bohórquez wanted to understand was as to how the sensory signal a nutrient provided was converted into an electrical signal in the ENS to cause the altered behaviour. Thus began a journey of studying the enteroendocrine cells using 3D electron microscopy.

This brought to light their structure in a way that nobody had studied before. It was discovered that these endocrine cells have microvilli, which are tiny projections, exposed to the side of the gut, and an internal protrusion like a foot called as a neuropod. This structure was so similar to the physical structure of neurons that Bohórquez’s team deduced that they must be connected to neurons in some way too. 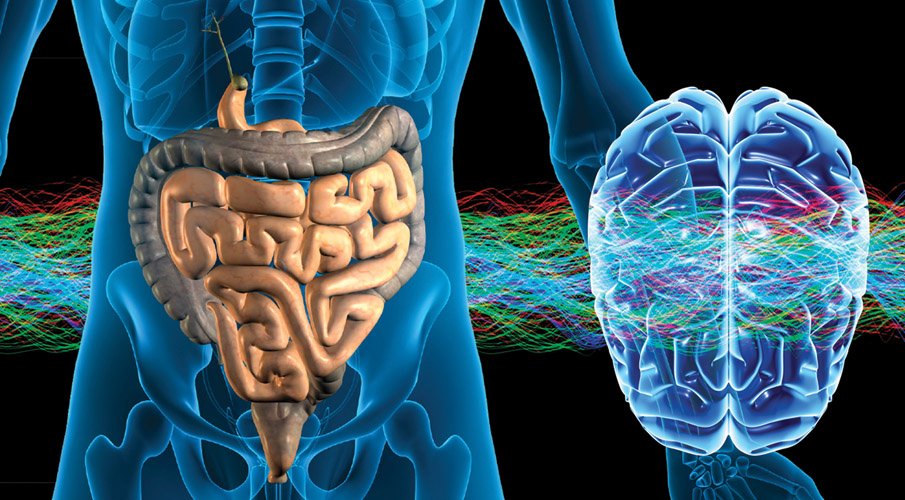 Tracking the synaptic connections through rabies

The tracking of the enteroendocrine cells to see how they were connected and to what was achieved by introducing a version of the rabies virus that had been modified to make it fluorescent into the colon of a mouse. As rabies infects and neurons and travels through synapses, its modified version was altered to allow the virus to only travel one neuron at a time, allowing the scientists track the neural circuits of the cells. A week after the procedure was conducted, the enteroendocrine cells had started to give a green glow, proving that the sensory cells were reacting just as neurons do.

When Bohórquez modified the virus further to allow it to make two jumps, the colon of the mouse once again glowed green, displaying where the connection between the nerve cells and the enteroendocrine cells existed. The physical synaptic connection was displayed, which was something that had never been seen before.

Understanding the connection between gut and brain, and identifying the pathway, will allow for newer forms of treatment for several medical disorders. Many conditions such as obesity, irritable bowel syndrome, autism, PTSD etc. all share a symptom that causes either hyper or hyposensitivity to gut stimulation, called altered visceral sensing.

For example, it has been suggested that anorexic children may be hyper-aware of food from a very early age. For normal children, it does not cause any problems, but when the children have higher temporal awareness, they can feel the sensations in their gut, trigger anxiety. The new research and its findings will help scientists treat such diseases better by differentiating between conditions which are physically caused, and which are psychological.

Are the enteroendocrine cells capable to smell, touch and taste? These cells are similar to the receptors present in the nose and mouth in terms of mechanical, thermal and chemical sensory perceptions. Bohórquez said that the possible connections were now being studied and future research would focus on that. It is not only the gut that possesses these cells either, he reminds us. Sensory cells are present in every lining of our bodies, such as our reproductory organs and lungs. Future research will help us understand better how these connections affect our feelings and behaviours.

Atmospheric Scientist Claims to Identify Who is Spraying the Skies
This Is How You Can Grow New Brain Cells, Regardless Of Age