Sanskrit is regarded as the ancient language of Hinduism, used in different means in order to communicate and dialogue with the ancient Hindu Celestial Gods. This chart details the NINE rules for being a human, as passed down by Ancient Sanskrit.

According to Ancient.eu, the name or better said the term ‘Sanskrit’ is derived from two the conjoining of the prefix ‘Sam’ meaning ‘samyak’ which indicates ‘entirely’, and ‘krit’ that indicates ‘done’, which translated conveys a meaning of perfectly or entirely done. Sanskrit is a standardized dialect of Old Indo-Aryan, having originated in the 2nd millennium BCE as Vedic Sanskrit and tracing its linguistic ancestry back to Proto-Indo-Iranian and Proto-Indo-European, and was primarily used by ancient cultures inhabiting ancient and medieval South Asia.

For nearly 2000 years, Sanskrit was the language of a cultural order that exerted influence across South Asia, Inner Asia, Southeast Asia, and to a certain extent East Asia.

It is one of the most important ancient languages thousands of years ago.

Sanskrit is today one of the 22 languages listed in the Eighth Schedule of the Constitution of India, which mandates the Indian government to develop the language. It continues to be widely used as a ceremonial language in Hindu religious rituals and Buddhist practice in the form of hymns and chants. Sanskrit is also an official language of the state of Uttarakhand— a state in the northern part of India.

See also  There Is A MASSIVE Underground Labyrinth In Egypt. Why Is It Kept From The Public?

Interestingly, while doing what we all do best—surfing the web—I’ve come across a curious chart which claims to describe the Rules for Being Human, as handed down from the Ancient Sanskrit Language.

We can summarize the rules to 9 must-knows:

So what are the rules? 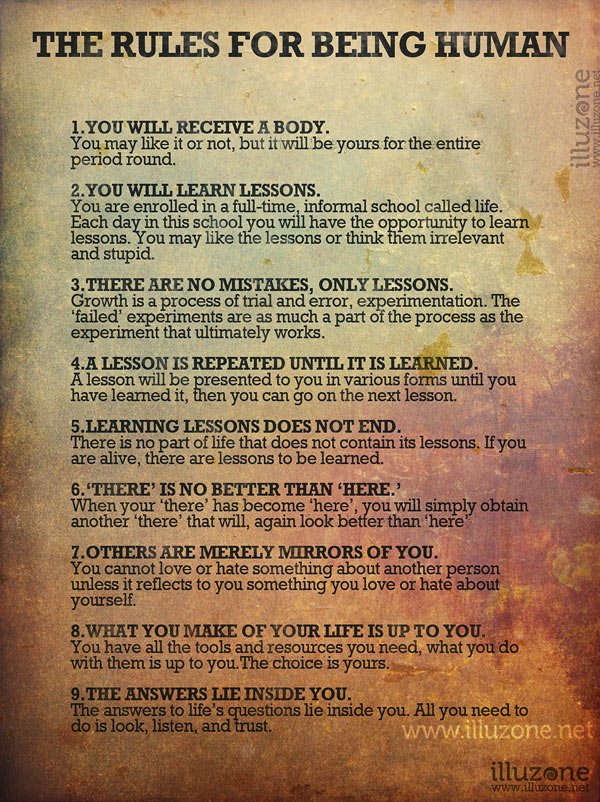 Well, according to the chart which was allegedly composed of Ancient Sanskrit:

YOU WILL RECEIVE A BODY.

You may like it or hate it, but it will be yours for the entire period this time around.

YOU WILL LEARN LESSONS.

You are enrolled in a full-time, informal school called life. Each day in this school you will have the opportunity to learn lessons. You may like the lessons or think them irrelevant and stupid.

THERE ARE NO MISTAKES, ONLY LESSONS.

Growth is a process of trial and error, experimentation. The “failed” experiments are as much a part of the process as the experiment that ultimately “works”.

A LESSON IS REPEATED UNTIL IT IS LEARNED.

A lesson will be presented to you in various forms until you have learned it. Then you can go on to the next lesson.

LEARNING LESSONS DOES NOT END.

There is no part of life that does not contain its lessons. If you are alive, there are lessons to be learned.

When your “there” has become a “here”, you will simply obtain another “there” that again, looks better than “here”.

OTHERS ARE MERELY MIRRORS OF YOU.

WHAT YOU MAKE OF YOUR LIFE IS UP TO YOU.

You have all the tools and resources you need; what you do with them is up to you. The choice is yours.

THE ANSWERS LIE INSIDE YOU.

The answers to life’s questions lie inside you. All you need to do is look, listen and trust.

More in Self Improvement