Yesterday what appears to be a legitimate atmospheric scientist in the US Navy for 10 years posted to Reddit, explaining that the massive aerosol geoengineering program people suspect is going on is in fact underway. 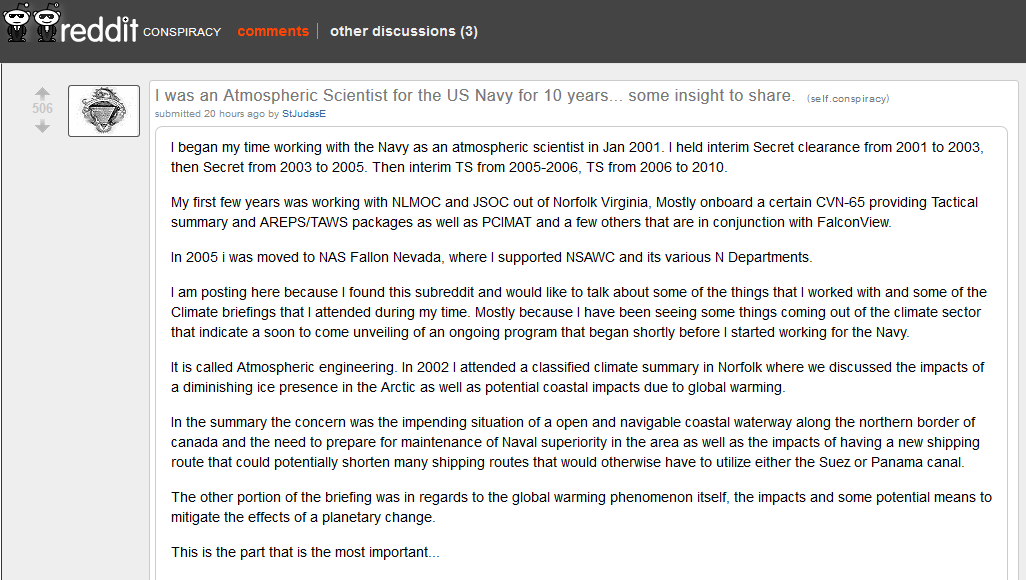 Geoengineering activists such as Patrick Roddie have archived the post.

US Navy scientist (verified) describes ongoing atmospheric engineering: "This is what is called "ChemTrails". Boeing and…

He started off by explaining he held interim secret clearance from 2001 to 2003 in the US Navy as an atmospheric scientist, and then “Secret from 2003 to 2005. Then interim TS from 2005-2006, TS from 2006 to 2010,” according to his post.He said he decided to post because he has been seeing some things come out of the climate sector that “indicate a soon to come unveiling of an ongoing program that began shortly before I started working for the Navy,” he said. True: the skies are openly being sprayed right now, and people such as David Keith and John Brennan are proposing that the US start spraying, as if it isn’t already happening.The alleged whistleblower said he attended a classified climate summary in Norfolk in 2002, in which diminishing ice presence in the Arctic was discussed, and it was made clear that Earth’s magnetic field changing is the cause of global warming, not human activity.

But most importantly, he summarized info from a more intimate viewpoint that had been covered in extensive detail in books before: info about climate engineering.

There had already been some research done in the later part of the 20th century in testing different aerosols and their effects on manipulating weather features by seeding clouds. For instance, they had tested cloud seeding the eye of a Hurricane to try and diminish the exhaust mechanism and inhibit growth to reduce coastal impacts of large tropical systems. (it was not successful for more than a brief period). The idea was that by injecting nanoaerosols into the upper tropopause or lower stratosphere we could create a thin ice layer that would increase the albedo of the planet and slow global warming. (At that time the metals being used were not the same as what is currently being used. From what i understand they have began using aluminols instead of silver)

This is what is called “ChemTrails”. Boeing and Lockheed martin as well as Raytheon polar services began implementing these devices in commercial jets about 150-20 years ago.” (maybe he meant to say 50 years instead of 150?)

He’s of course talking about… this. 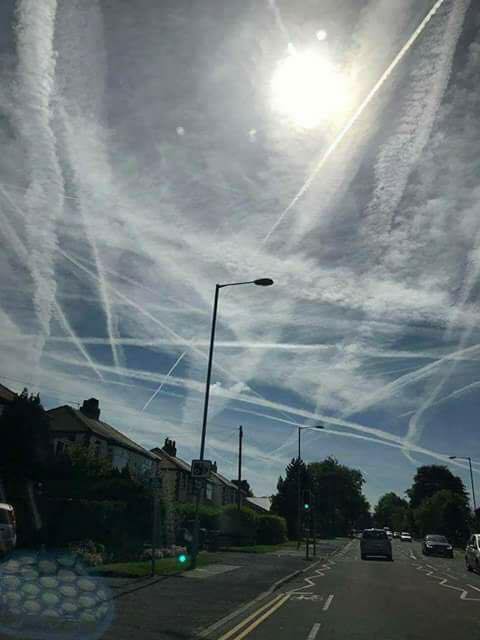 This is the exact same info that was presented by researchers such as Peter A. Kirby, from the perspective of a researcher rather than a low level insider. Entire books have been written about this.

Raytheon seems to be one of the most central “defense” contractors to climate engineering, being intimately involved with the “HAARP-type” facilities, and the energy being blasted into the stratosphere to interact with the sprayed aluminum aerosols. 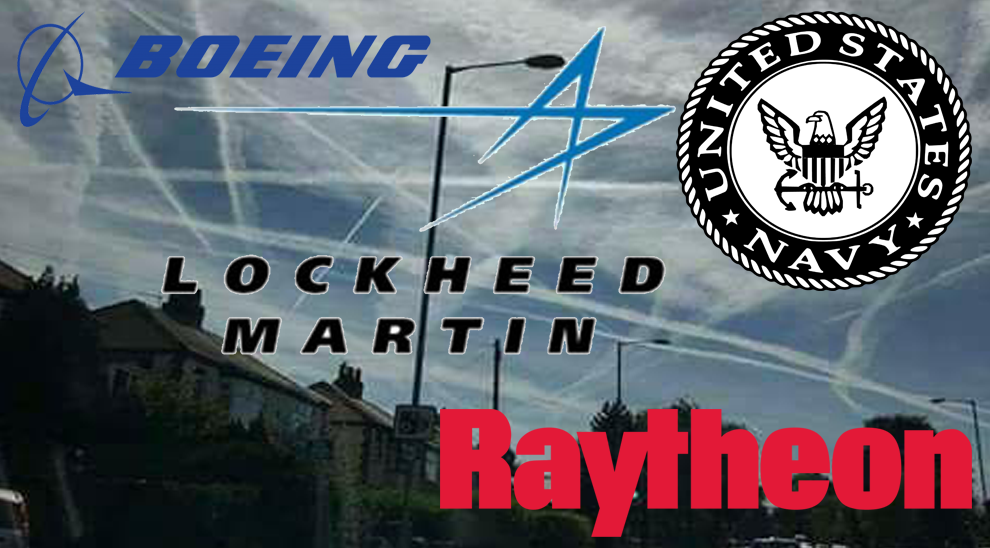 As an atmospheric physicist I have to say, the climate engineering that is taking place is irresponsible. There are no studies on nanized aluminols and the health effects. Sure it can take decades or longer for suspended particles in the stratosphere to settle into the lower atmosphere and eventually the surface, but they WILL eventually settle! Lithometers will not remain up for ever… AND we have yet to address the real root of the problem… and we likely NEVER WILL…

our magnetosphere is weakening in part or whole due to the increased amount of EMF that is being produced on our earth and sent out into space, or being refracted and reflected off of the sheet of injected particles for comms. EMFs cause cancer for the same reason that we are seeing these changes. Interfering phase lengths of man made EMF with naturally occurring EMFs. And they will not admit to it because it will hinder military and government comms as well as other programs that use satellite link or programs that radiate strong EM waves into space. (HAARP). 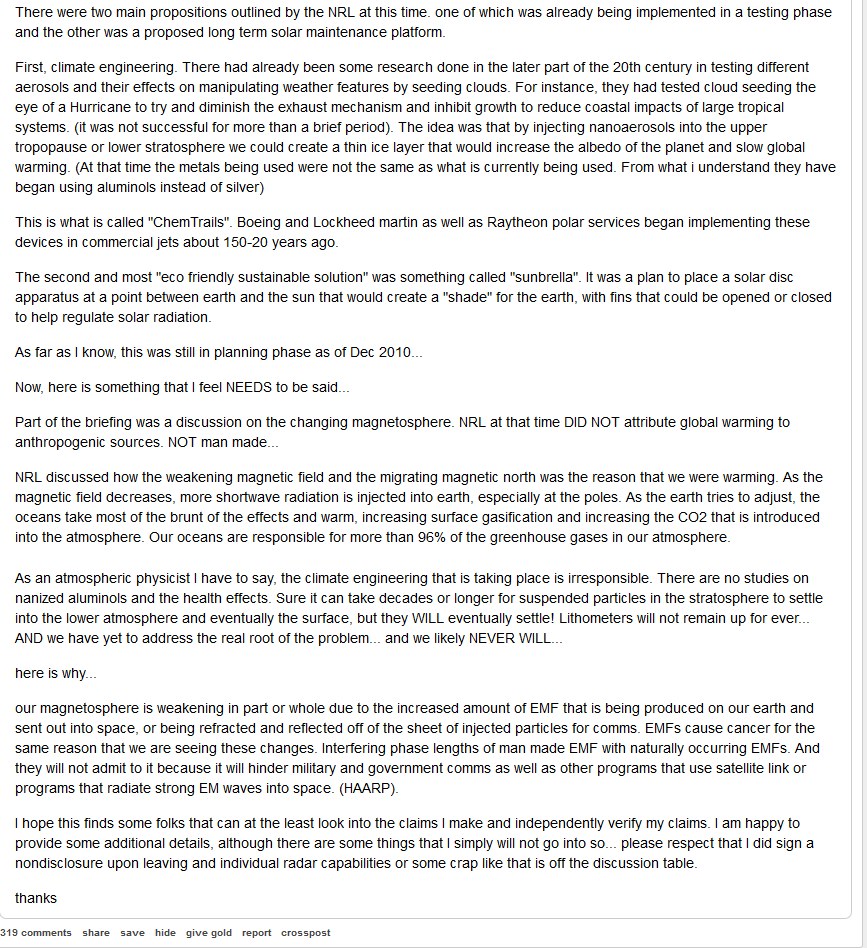 What this man is saying, is that disclosure of geoengineering is coming soon. It’s been happening for the past several years.

See also  Science Behind Sleep Paralysis And Why It Happens

The CIA director came out at the Council on Foreign Relations in 2016 and called for the skies to be sprayed.

Harvard figure David Keith is pushing for the spraying of the skies.

NASA sprayed colorful toxic barium and geoengineering related metals in the sky, convincing the public to look at it like some meteor shower or natural beauty in a disgusting show of normalization earlier this year.