Fathers have an important role to play on their daughter’s wedding day. It’s a chance for them to finally give away their little girl to another man by walking her down the aisle. Whilst this tradition isn’t for everyone, it’s still adhered to by many.

Because it’s customary for fathers to give away their daughters on their wedding day, many young women are given away by other important men in their lives if their biological father isn’t around – such as their brother, grandfather or stepfather.

Anonymous Redditor, godzilla_moon, took to the website to express his disdain after his girlfriend and stepdaughter did the unthinkable in the weeks leading up to his stepdaughter’s wedding – a wedding that he had shelled out tens of thousands of dollars to pay for.

“My stepdaughter will be getting married on August 3rd. The wedding planning has consumed most of her and her mother’s life (I say her mother because we aren’t married, though we’ve lived together for 10 years) for the past six months.

My stepdaughter graduated last December from university. I paid for her to go to college, though it was a state school it still ran $40K. She does not have a job and has been living with us for the duration of her college career and since her graduation. I also bought her a car to get back and forth from school when she finished high school.”

“From time to time her deadbeat father would pop into her life and she would fawn all over him. Although he has not contributed a cent to her education or paid any child support, though that is my girlfriend’s fault as c.s. was not part of the settlement, she still loves him and wants him in her life. He stays long enough to break her heart by skipping town and breaking some promise that he made her.” 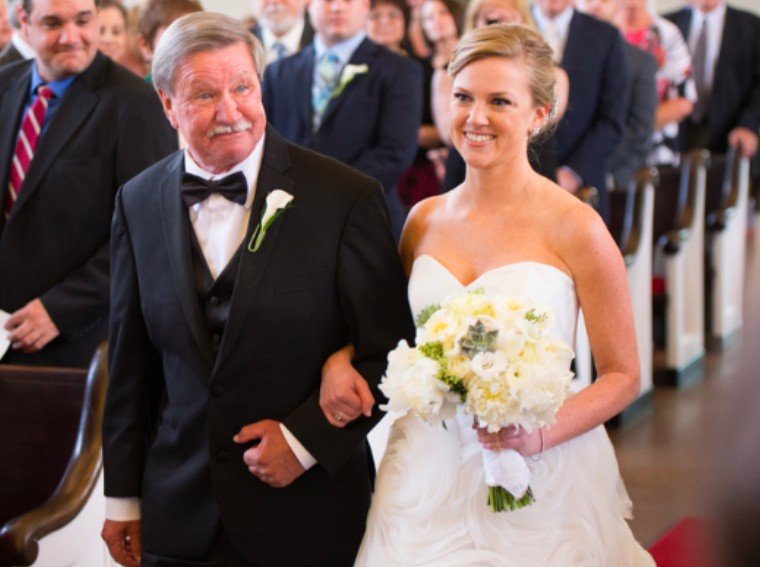 It’s clear from godzilla_moon’s opening that he cares about his stepdaughter very deeply and has treated her like one of his own. However, when it came to her $40 – $50,000 wedding, the feeling wasn’t reciprocated.

Since godzilla_moon was paying for his stepdaughter’s lavish wedding, he had a few small requests in return. Requests that his girlfriend and stepdaughter seemed happy to honor – until their selfishness took over.

“The wedding venue holds 250 people max. I gave them a list of 20 people that I wanted invited, you know, since I was paying for everything. They told me that was no problem and they’d take care of it. So I let these people know they’d be getting an invite and they should save the date.

Saturday, I saw one of my friends on this list at the golf course and asked if he was coming. He told me that he wasn’t invited. He told me that he got an announcement, but not an invitation. He had it in his back seat (along with probably six months of mail) and showed it to me. Sure enough, it was just an announcement, and my name was nowhere on it. It had her dad’s name and her mom’s name and not mine.”
It’s easy to see why this guy was upset when this happened. Even if you have a well-paying job, you still have to work hard for your money, and yet this man was being taken for a ride by his girlfriend and stepdaughter.

If it hadn’t been for that accidental meeting on the golf course, he may not have found out that his guests hadn’t actually been invited until the wedding day itself.

“This led to a pretty big fight with my GF, as I found out that NONE of my list of twenty ‘made the cut’ for the final guest list because ‘250 people is very tight.’ I was pissed, but not a hell of a lot I could do because the important people in my life had already been offended. My GF said ‘if some people didn’t rsvp yes, I might be able to get a couple people in.’ But that is an ultimate slap in the face in my opinion. So I was boiling on Saturday.”
She’s obviously forgotten who’s paying for this wedding…

“Yesterday, we had a Sunday dinner with the future in-law’s family and us and a surprise guest, the ‘Real Dad.’ At this little dinner my stepdaughter announced that her ‘Real Dad’ was going to be able to make it to her wedding and that now he’d be able to give her away. This was greeted with a chorus of ‘Oh how great’ and ‘How wonderful’s.”

You’d have thought she’d have allowed both her father and stepfather to walk her down the aisle at the very least!

“I don’t think I have ever felt so angry and so disrespected. I was shaking. I took a few seconds to gather my composure, because I honestly wasn’t sure if I would cry or start throwing punches or both. Once I was sure I’d be able to speak I got up from my chair and said I’d like to make a toast. I can’t remember exactly what I said but the gist of it was this:

‘I’d like to make a toast.’ The sound of spoons against glasses ring in my years. ‘It has been my great pleasure to be a part of this family for the past ten years.’ Awe, how sweet. ‘At this point in my life I feel I owe a debt of gratitude to bride and groom, because they have opened my eyes to something very important.’ Confident smiles exchanged. ‘They have showed me that my position in this family is not what I once thought it was.’

See also  10 Piriformis Stretches to Help You Get Rid of Sciatica, Hip, and Lower Back Pain

And now a glimmer of confusion and shock begins to spread on the faces in the room. ‘Though I once thought of myself as the patriarch or godfather of the family, commanding great respect and sought out for help in times of need, it seems instead that I hold the position of an ATM, good for a stream of money, but not much else. As I have been replaced as host, both on the invitations and in the ceremony, I am resigning my financial duties as host to my successor, Real Dad. So cheers to the happy couple and the path they have chosen.’ I finished my drink. ‘You all can let yourselves out.’”
This guy is a complete savage. It just goes to show how pent-up rage eventually boils over!

“EDIT: June 9th 1:15 am. Girlfriend and Bride are now moved out. They are moving in with the groom. It was very hard not to be petty with some of the ‘belongings’ they took with them, but it’s done and I switched out the locks and now it’s time for a brew. I can’t believe how popular this story got, but I feel good to be given support by so many. If I find out what happens with the wedding, I will let you know, but I can’t guarantee that I will put in the effort to find out.

From what [I’’ve] heard they are trying to “scale things back” and get his parents to help out. GF burned bridges when I found out she tried to write herself a check on our joint account the day after the unpleasantness. By then I had already moved money, so I guess I’m a bigger ass than her, but I could feel it coming. That’s all. Thanks.”

What do you think of godzilla_moon’s actions? Should he have tried to calmly speak to his girlfriend before ending a long-term relationship so suddenly, or was he completely justified to walk away like he did?

The majority of Redditors were of the opinion that godzilla_moon did the right thing, and began to speculate about what would happen next. Relationships are built on mutual trust and respect, and these certainly didn’t exist in this man’s ‘family’.